Yes that’s right, The Brotherhood made it the full distance without loosing a single team member. Everyone who started the bike ride crossed the finish line together. And what an amazing ride it has been! 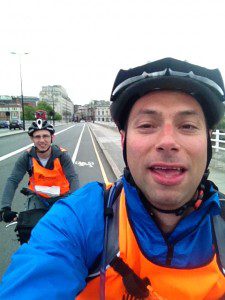 In the coming days we intend to write a blog to tell you all about it. but to give you a brief overview of the ride we are putting this post up to wet your appetite before we go to bed. Don’t forget that it isn’t too late to sponsor us. In fact if you haven done it now would be a great time. We would like to see if we can make the total go over £900.00 so if you haven’t done it yet please spare us a little cash and hit the link below to sponsor The Brotherhood.

With lots of landmarks to see you would thing that we would stop as often as possible to take pictures but the truth is that it was very cold and stopping for long periods of time or messing with cameras made it hard to get good pictures. More will follow in the next few days.

while we were at the top of Alexander palace, we got a picture of Brother Mary while she was riding her bike. worth a look when you come back

All in all this was a very enjoyable ride with thousands of people who were happy to chat at every set of lights. See the ride statistics in full here;

When you are looking through the stats the one thing that you will notice is that there is a lot of time stopped. this was not something that we had thought of but almost every set of traffic lights in London decided to be red and as such every time they were the track records it as waiting. if we took all that time off, then the ride would have been a lot quicker. however, there were times when waiting at the traffic lights was a blessing 🙂 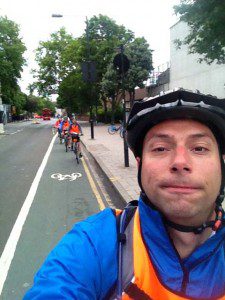 One of the most interesting thing about the ride this time was having other people all around you where ever you were in the ride. this meant that there was always a sence that you were a part of something big and although everyone who was there had their own charity to raise money for they were all there for the same purpose. to help others and have some fun. I think that I can speak for everyone in The Brotherhood when I say that it was an amazing feeling to be riding with so many others. Sticking together in our own little group made it all the more interesting as we were able to keep each other motivated as we all felt the burn at different times.

Getting to the top of Alexander Palace was a real sense of achievement for us all as this was a very long climb and being able to be doing that as the sun came up and looking out over London as we continued to ride on down the hill on the other side was really satisfying. Keep your eyes on this site over the next day or so as we will be putting together an album of all our pictures for you to see how the whole bike ride went.

We hope that you are able to understand that although fun to do, this bike ride has a very important and personal reason behind it. One of the families close friends is a sufferer of Dystonia which was the charity that we have been raising money for as we rode the 67.05 miles across London. This disorder is life changing and can affect almost anyone. In the Case of our very good friend it has been a big part of his life for sometime. but very little is known about Dystonia and as well as raising money for the cause and reasearch in to it, our mission was also to raise awareness of Dystonia and its effects on people and their families.

Please take the time ti visit the Dystonia Society Website and learn more about its effects and then spread the word so that people get to know the term.

Learn more about Dystonia and its effects.

So far, The Brotherhood have managed to raise,

We would like to thank all those who have been able to give a donation big or small very much and promise you that the money will be spent well in trying to reasearch the condition and help those who suffer from it.

Thank you all from the bottom of our heart on behalf of the Dystonia Society.